Congratulations to our June 2022 Scholarship Winners! 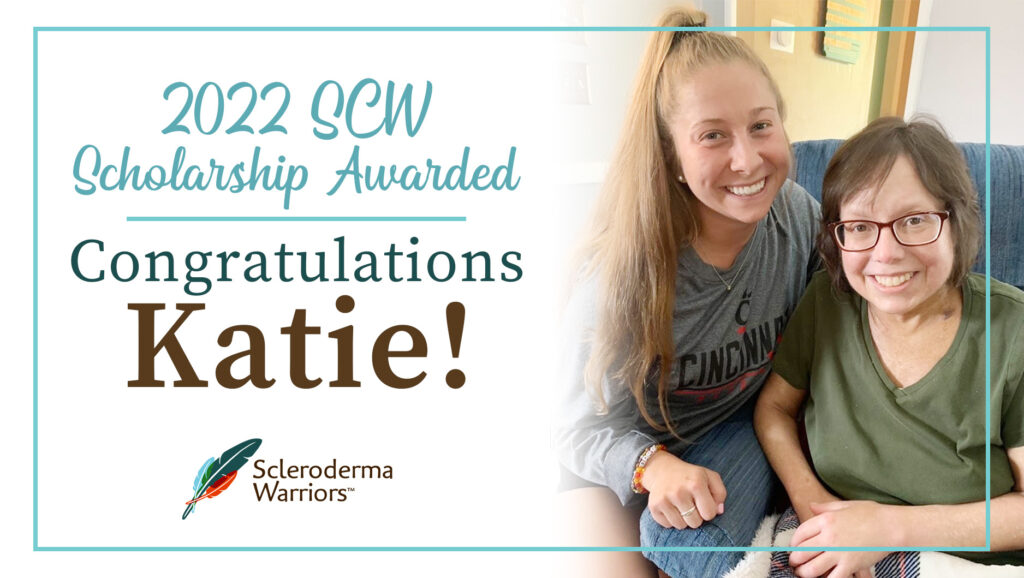 Our 2022 Scleroderma Warriors Scholarships have been awarded!

Join us in congratulating Katie. Katie has been kind enough to allow us to share her essay on our website for others to see how Scleroderma has changed her life. You can read Katie’s essay below:

“How Scleroderma Changed My Life”

I very distinctly remember the first sign I saw of my mom’s scleroderma.

It was the 2020 Homecoming weekend at my undergraduate school, Marietta College. I was a senior and on the Homecoming court, representing our women’s soccer team. My parents had made the trip down to see me and attend the football scrimmage, where I would be announced as a homecoming court candidate. As they were leaving to head back home, I thanked them both for making the long drive to support me. I remember grabbing my mom’s hands and feeling that they were both fairly swollen. I questioned her about this, but she shrugged it off as if it was not of concern. In hindsight, I realized that she only did this to give me a peace of mind and not to take away from my special weekend. I didn’t entirely buy her story and went home that night questioning Google about what possible diseases could elicit this symptom.

The next time that I saw my parents was when I came home for Thanksgiving break. I would call my parents and talk at least once a week, but that could not prepare me for the physical changes that were brought upon my mom since the last time I had seen her. When I walked through the door, it was evident to me that something was not right with my mom; however, I couldn’t bring myself to ask what was going on. The next evening, my brother and sister also arrived home from their respective colleges. It was a commercial break during a college football game that my mom told us that she had been diagnosed with systemic scleroderma. My emotions ranged from confusion, to fear, to sorrow. I had little knowledge about what this disease was at the time, but I could tell from the cracks in my mom’s voice that it was not going to be good. My siblings and I asked questions that my parents had very few answers to. I spent that night in my childhood bedroom trying to wrap my head around this unfamiliar disease and eventually crying myself to sleep.

Initially, the disease didn’t present as strongly as I had expected it to. During the holidays, we had to put my mom’s Christmas presents in bags, rather than wrapping them with paper, and I had to help her out a little more than usual while she prepared our ham for Christmas dinner. Things were a bit out of the ordinary, but it didn’t seem like this disease would completely turn our world upside down. I knew things were starting to get serious in April of 2021. Due to COVID, my senior soccer season was moved to the spring. My freshman year, my parents attended nearly every non-weekday game that I had played in. However, my senior night- and final collegiate home game- was rapidly approaching, and my parents had yet to make it to a game that season. As I was preparing the paperwork for my senior night ceremony, I gave my parents a phone call. Hearing my mom say that she wouldn’t be able to come to my senior night left me with a feeling I could have never prepared for. I tried to keep on a brave face until I hung up the phone, but in reality, my heart was shattered. It wasn’t the thought of my mom never getting to watch me play soccer again that scared me. It was the thought of my mom being in such poor condition that she physically couldn’t come, which led to many sleepless nights.

My undergraduate college graduation was a very bittersweet day. I had mentally prepared myself for my mom not being able to see me accept the diploma that she watched me work so hard to receive. I was ecstatic when she confirmed that this would not be the case. The night before graduation my parents were stopping by to drop off some celebratory gifts to my roommates and I when I opened my mom’s car door and could hardly recognize the woman inside. The woman in the passenger seat was frail, nearly skin and bones. She had lost a notable amount of hair and seemed to struggle to lift her arms when reaching to embrace me. I’m sure I didn’t do a great job hiding the mixture of shock and fear on my face when seeing my mom in this condition, but I’m thankful that I was able to hold back the tears until I made it back to my dorm room.

From this point on, I knew that my life was going to change substantially. I was glad to be going home for the summer because I could tell this disease was not only taking a toll on my mom, but also that my dad was struggling. When I settled back in, he showed me the various accommodations that he had made in order to make life easier on my mom. The most drastic changes were that she now had a bed on our first floor, she used a commode instead of a toilet, and my dad used a baby monitor so he would wake up when my mom needed things at night after he had gone to bed. The first night I was home, I told my dad that I could take my mom’s monitor for the next few nights, to give him a break. Throughout the night I could hear my mom moan from the pain of trying to roll over. Her medications also caused severe nightmares- much worse than my dad had previously warned me about. That night I sprinted downstairs when I heard my mom screaming that there were people in our house watching her. After I turned on all of the lights and checked the main floor of our home, I went to wake up my dad and tell him what had happened. He explained that this had been a frequent occurrence as of late, and that I shouldn’t worry and go back to bed.

I couldn’t believe that this had been my parents’ reality for the past several months.

I was hardly getting any sleep at night since I was waking up so frequently to help my mom. This became more difficult as I was also working three jobs and taking an online college class for graduate school. Our household that was well-known for our silly, happy-go-lucky attitudes felt robbed of our frequent jokes and smiles. However, the hardest part of it all was seeing the strongest woman that I know become completely dependent on others, against her will. My mom was also very heavily medicated during this time, which had a variety of effects on her. Some days she would be in bed until 7 p.m., others she would yell and cry for no reason at all, and on the worst days, she would hallucinate to the point that she couldn’t even recognize me. Those few months ate me up physically, mentally, and emotionally.

In August, I moved a few hours away to begin my first semester of Physical Therapy school. I was overwhelmed with guilt for leaving my parents, considering the state that my mom was in. However, I was encouraged by the entirely new love that I had developed for the field that I will be soon entering. Over the past year and a half, my mom has undergone multiple bouts of physical therapy. I am now able to appreciate a whole new perspective on how significant of an impact physical therapy can have on a struggling individual and their loved ones. I’ve come to realize the effort and attitudes of these health care workers can make all the difference in a patient’s route to a better life.

This has helped me to learn what kind of health care worker I strive to be one day: the kind that my mom loves.

Today can be the day you help a child whose life has been affected by scleroderma. Help us award one-time grants to children and grandchildren of those afflicted with systemic scleroderma.

As a nonprofit, we rely on donations to provide grants to kids whose lives have been affected by scleroderma. Together we will continue to care and continue to grow.